This article appeared on January 24, 2018 in BoatingMag.com

It’s hard to say whether the Jeanneau Leader 10.5's accommodation plan or its hull design exhibits the most innovation.

European powerboat designers often show above-the-water flair that North American boaters associate with exotic locales like the French Riviera, but they also pack compact but comfortable living spaces into their creations. They like speed, but in a land where fuel can cost twice as much as in North America, they relish efficiency. And they believe that we will like that combination too. That’s why Jeanneau intends to become a major powerboat player on this side of the pond (the French company already has two manufacturing plants in the U.S.). A couple of test runs aboard its Leader 10.5 showed us why.

We achieved crisp cruising speeds from the mid-20s to the mid-30s at attitudes proud enough to present the ­wave-cleaving bow to oncoming seas, with the big outboards easing along ­between 3,800 and 4,500 rpm. Fuel economy was excellent for a gas-powered, 10,000-pound boat carrying a 3.5 kW diesel generator, and noise levels proved low enough for easy conversation. (Note that the generator was running during one of our tests to keep the cabin air-conditioned, but it did not register on the ­decibel meter.) The Leader ate up the miles in comfort, with a conservative range of 200 miles over seven hours at 4,000 rpm. Clearly, the steps and tunnel work well together. 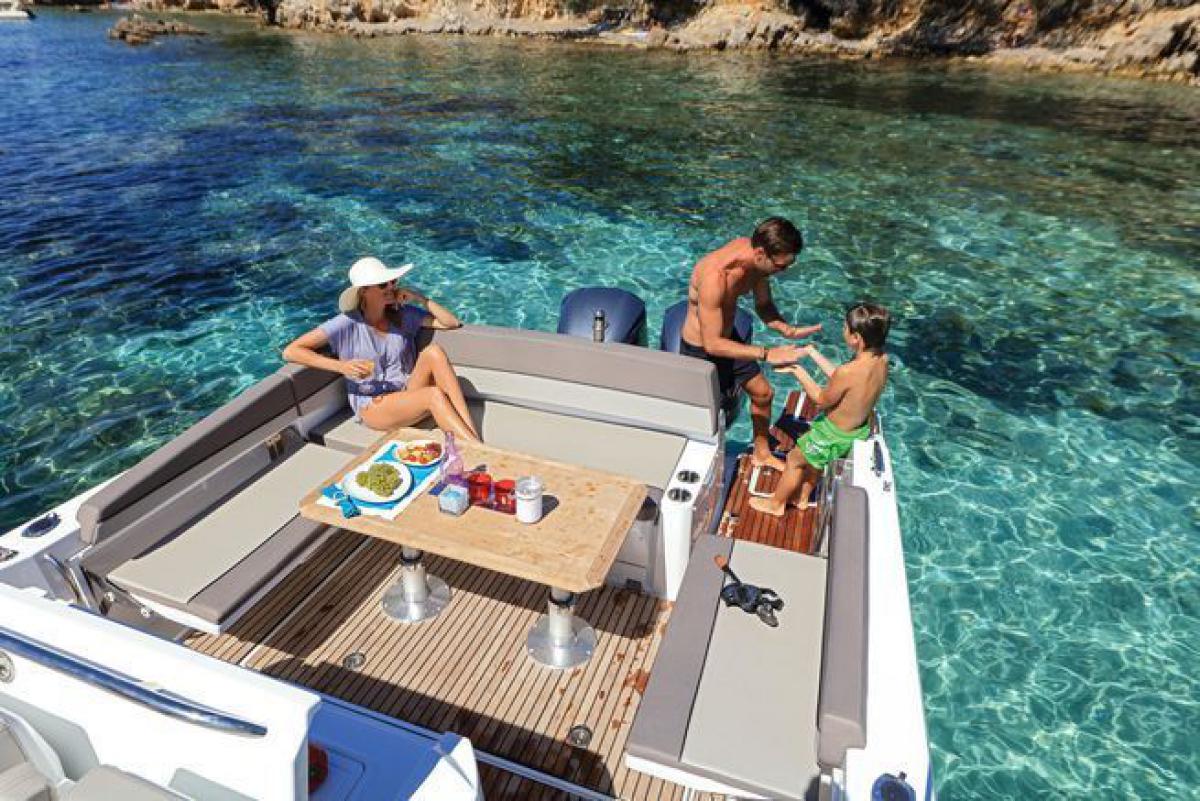 Credit it to Jeanneau, which worked out airflow over the helm’s windscreen and the free-standing hardtop to minimize sound. The skipper pilots from the center of three bolstered chairs at a dash large enough to flush-mount a pair of 12-inch electronic displays, plus Yamaha engine monitors. The chairs mount on an athwartship galley unit, with an (optional) electric grill and a pair of sinks over a 1.5-cubic-foot refrigerator. It’s as sociable as it is functional.

Running in seas? We admired the recessed grab rail on the aft edge of the ­galley. The cockpit holds a wide transom seat, with a pair of folding seats port and starboard to offer an L- or U-shaped lounge with a teak table. The table can drop to form a rear sun pad. With the port seat folded down, there’s easy access through a sturdy transom door, swinging on robust hinges, to a large swim platform. 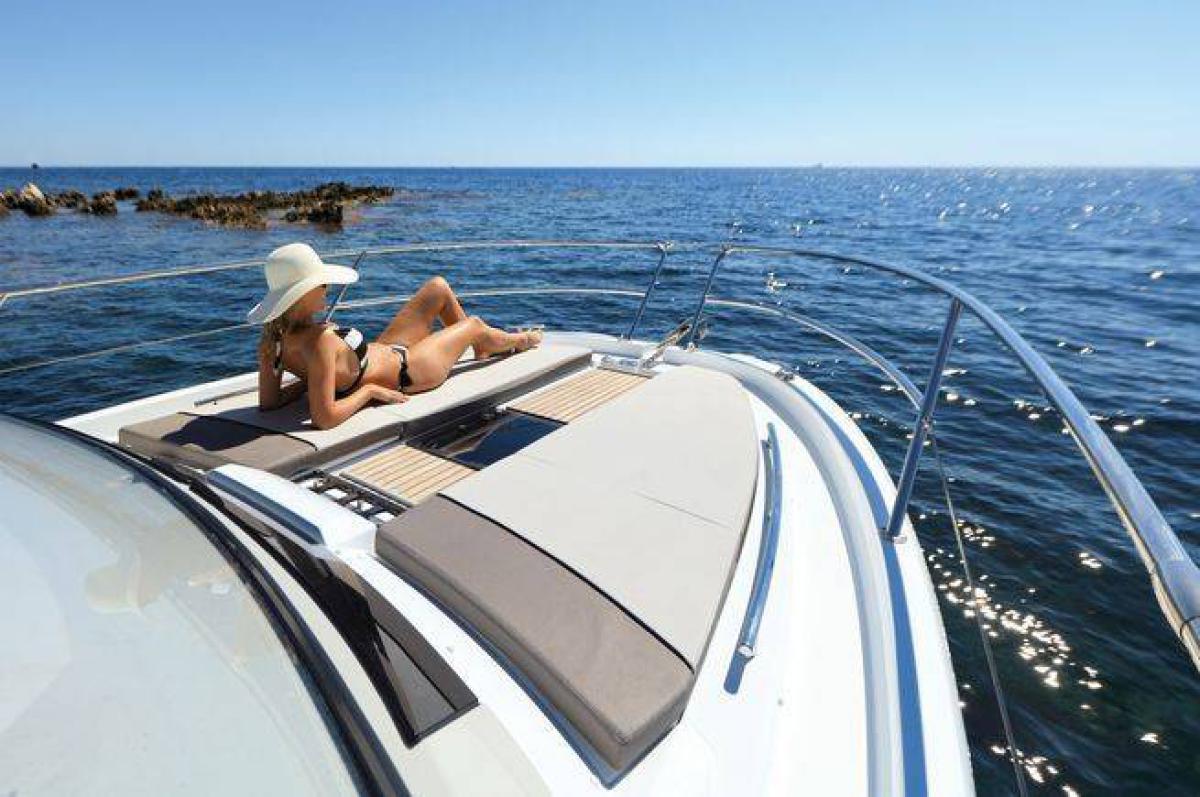 The best sun pad, though, lies on the bow deck, via the main (9-inch-wide) recessed port side deck or the secondary (6-inch-wide) recessed starboard-side, with a thigh-high rail from helm to bow for support if needed. The sun pad is wide enough for two, with lifting backrests for reading, conversation and watching sunsets. A central cushion lifts to expose a skylight for the cabin below when desired. Forward of the pad, a windlass mounts over a rode/chain locker, controlling an anchor mounted on the stemhead.

Comparison shopping will be challenging. We know of no other boat featuring a broad, comfortable forward sun pad, riding on a double-stepped hull and powered by quiet, virtually smoke-free outboards. We think these features, especially the layout, will find appeal among boaters.

From the first glance, the Jeanneau’s cabin is surprisingly bright with natural light. The secret lies in strategic placement of the aforementioned bow skylight, another placed just forward of the windscreen, port lights on the lower sides of the cockpit galley, and smoked safety-glass windows built as accents into the hull’s topsides. From the companionway to port of the helm, the space opens to a large ­salon with a two-burner galley to port opposite an enclosed head with separate shower compartment. The forward space holds a two-sided lounge with a pedestal table that converts to a double bunk. The midcabin offers another 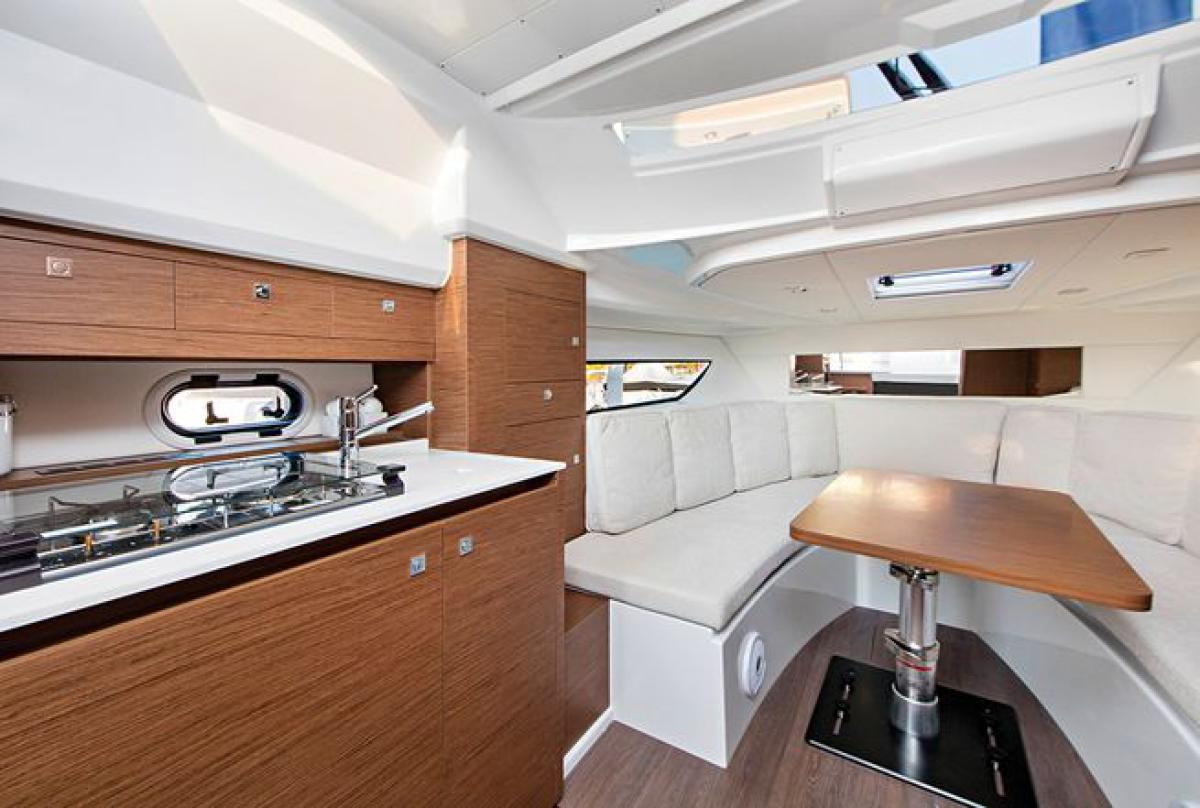 double with sitting headroom. Both berths can be closed off with curtains for privacy. Jeanneau’s design team has cleverly built in multiple storage spaces, including drawers, shelves and a pair of hanging lockers, as well as access to plumbing, wiring and (if fitted) the air-conditioning system.

Continuing with the “built with the mechanic in mind” theme, the large ­cockpit hatch provides human-size access to major systems, from tanks, plumbing, and wiring to the generator. The hatch also demonstrates Jeanneau’s commitment to seaworthiness with surrounding deep gutters that drain water to screened scuppers, with hoses that lead aft through the transom. Yes, they are neatly double-clamped and readily accessible below deck should they become clogged.

Jeanneau’s Leader 10.5 should draw appreciative glances, especially if spied underway at speed. But it’s also designed and built to get the crew home safely and to provide reliable long-term confidence in ownership.

High Points
* Sophisticated Michael Peters’ double-step hull and a CE rating of B (offshore).
* This boat sports a low profile and a roomy, well-equipped cabin. Wow!
* Good access throughout to wiring, plumbing and mechanicals for maintenance.

Low Points
* We’d like to see grab handles for crew standing on each side of the helm chairs.
* Minimum planing speed — about 20 mph — is higher than some other boats. 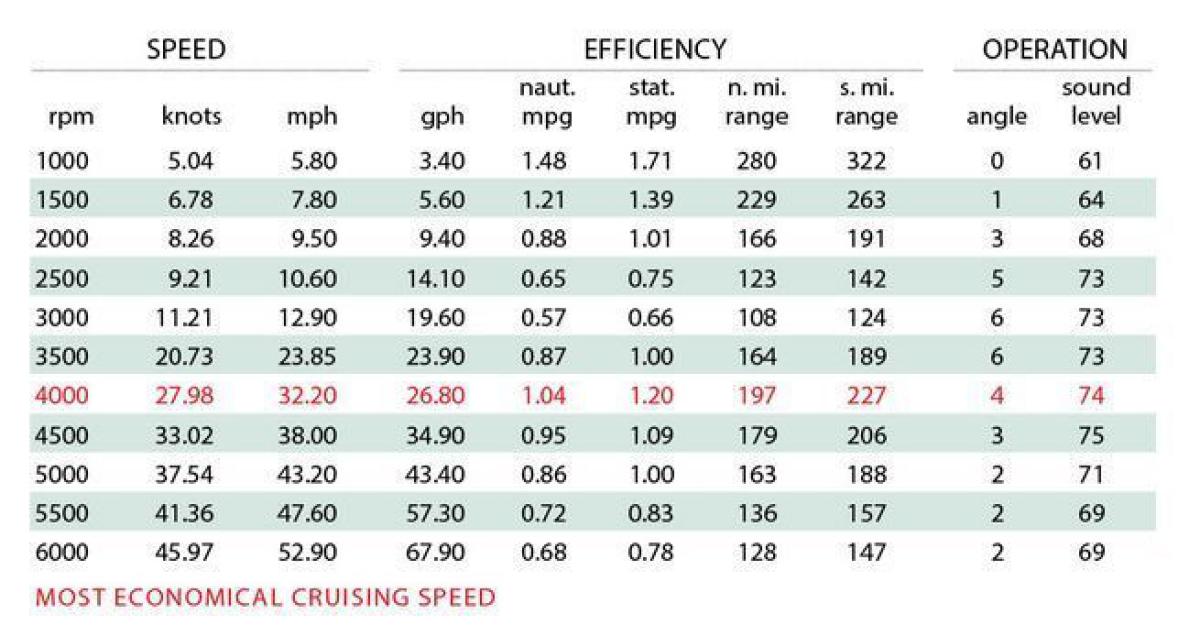